In London, on 27 Aug 1969, U Nu held a press conference announcing he was the legal prime minister of Burma and he pledged to the people of Burma that he would not give up his struggle for democracy in Burma.  U Nu announced the formation of a new party, the Parliamentary Democracy party, to restore representative government in Burma. A party headquarters and a de facto government-in-exile were established in Thai border (Taung-Gyi-Ko-Lone).

The cover shown above is the philatelic fantasy mail sent from Taung-Gyi-Ko-Lone, United Front Headquarters in Eastern Burma.  The cover bares the symbol with Peacock in Octagram, with the text “Union Government” above the peacock and “1970-1972” below.  Above the symbol, the text Taung-Gyi-Ko-Lone appears in Burmese and English. 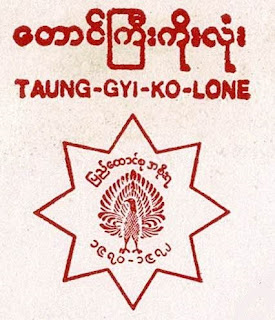 The blue 5 Pyas Indian Roller Bird stamp of 1964 was affixed and cancelled with fancy cancellation of roller type dated 22 May 1972.  The texts on cancellation are Union General Post Office on the upper arch, BURMA G.P.O. on the lower arch and “Elected Government of the Union of Burma Liberated Zone” on the wavy roller lines.

As this is a fantasy cover, the postage seems not valid.  Thailand stamp was affixed for postage and cancelled at Maesot dated 7 June 1972 and Bangkok dated 10 June 1972 on the reverse.  It is clearly stated Philatelic Cover and addressed to French Embassy in Bangkok.  As U Nu’s government-in-exile was just a de-facto-government, its postage, postal services, cancellation were not officially accepted, but the letter was successfully delivered.  Likewise, Karen independent self-proclaimed states of Kawthoolei also issued its own postage stamps in 1986.

Posted by Ko Toe Philately at 00:11 No comments:

Email ThisBlogThis!Share to TwitterShare to FacebookShare to Pinterest
Labels: 1972

My involvements and commitments in societies

As of 2021, I am the member of four philatelic societies around the world, one in Myanmar, one in Singapore and two in U.K.  This report is to update my involvements and commitments in some of these societies.  I attended the virtual AGM of Zui You Philatelic Society, based in Singapore, on 12 December 2020.  In this meeting, the new executive committee was successfully elected and Mr Seow Shin Horng was elected as the new President.  My congratulations to Shin Horn and committee members.  As in the last term, I was appointed as an Auditor by the committee.

On 20 February 2021, Burma (Myanmar) Philatelic Study Circle [B(M)PSC in short], based in U.K, held the virtual AGM.  In this meeting, the existing committee members were re-elected, while Mike Ley from U.S.A and I were elected to the positions of committee members without office. My congratulations to the new exco.

The Burma (Myanmar) Philatelic Study Circle is a UK based organisation with an international membership, for collectors of all aspects of Burma. It was founded in 2005, and grew out of the UK Chapter of the “old” Burma Philatelic Study Circle, which existed from 1979 to 2000 and published The Burma Peacock under the very able editorship of Alan Meech in Canada.

The main benefit to B(M)PSC members is our quarterly journal, The Burma Fantail, successor to the Peacock, which is mailed printed and stapled in full colour, or emailed as a colour pdf file. Twice yearly, UK members meet in London at Stampex; meetings are cordial and members’ displays are always interesting and worthwhile.

For a sample back issue of the Fantail in pdf format please contact the Editor, Richard Warren, at rwarren99@yahoo.com. For details of current memberships rates, or to join, please contact our Secretary, Mike Whittaker, at manningham8@mypostoffice.co.uk.

Posted by Ko Toe Philately at 08:35 No comments:

Email ThisBlogThis!Share to TwitterShare to FacebookShare to Pinterest
Labels: 2021, B(M)PSC, Zui You

Two aerogramme types with outstanding double-sided printing errors emerged recently in eBay. The
dealer has provided the information about the sheets. He bought a pack of each aerogramme directly
from Nay Pyi Taw CTO, and surprisingly the packets came with these treasures.

These errors could have happened due to the printing of the imprints and address lines erroneously
on the writing side of the aerogramme. Upon noticing printing on the wrong side, the handler may
have fed to the printer again to print on the correct side.

The first type is the 1990 issued aerogramme with the imprint of the 1990 Rakhine Lady 1K definitive,
inscribed “Union of Myanmar” (top, previous page). Perhaps because the overlay colour on the writing
side is slightly different from the front, the error imprint has darker shades. The gum on the writing
side is still intact and visible. The seller confirmed that a total of 16 such copies existed. 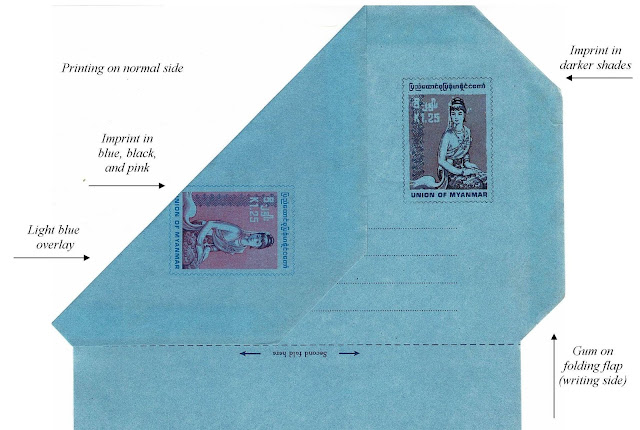 The second type is the 2001 tourism aerogramme with the imprint of the 1999 Burmese Harp 30K
definitive (below, previous page). The imprint on the writing side has slightly darker shades likewise.
The front side has a light green overlay and it leaves a simulated perforation around the imprint. But
as there is no overlay on the writing side, it obviously omits the simulated perforation around the
imprint. The gum on the folding flaps is still intact and visible. 18 such error copies are known to exist. 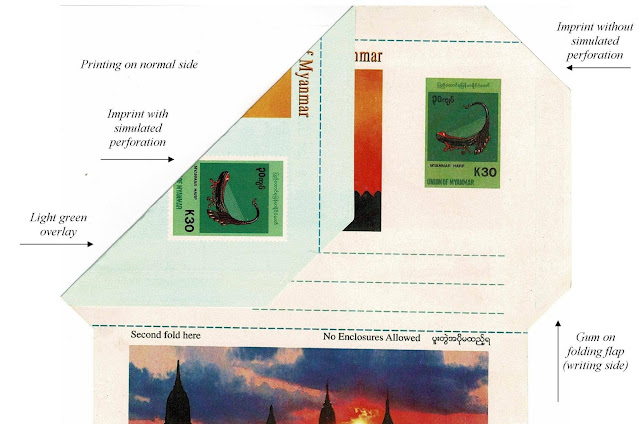 Posted by Ko Toe Philately at 18:07 No comments:

Email ThisBlogThis!Share to TwitterShare to FacebookShare to Pinterest
Labels: 1990, 2001, aerogramme

OHMS Economy Label, used by the Government of Burma in exile

The OHMS economy label was pasted on the used India postal stationery envelope.  The postage of one and a half Anna paid for first tola inland letter rate.

Economy labels are sometimes used to solve the stationery shortage problem.  This is a gummed piece of paper, with the and office address on it.  This instructions were to put the response in the original envelope, cross out or cover the original address,  fasten the envelope using the economy label, and put it in the mail. The recipient can open it by cutting the label slip.

Posted by Ko Toe Philately at 19:20 No comments:

Email ThisBlogThis!Share to TwitterShare to FacebookShare to Pinterest
Labels: 1942, Simla

Following the prepaid DEMS smart envelopes, Myanmar Post issued prepaid registered smart envelopes on 5th Jan 2021.  Initially it was planned to issue on 1st Jan, but was actually issued on Jan 5 due as 1st to 4th Jan falls on public holidays in Myanmar.

The envelope comes with the trackable QR code and receipt.  Once posted, the tracking information part is teared off and given to the sender as acknowledgement.   Although there is no stamp imprint, the postage and registration fees are prepaid.  The envelopes were sold at 600 Kyats (200 Kyats of domestic mail up to 20 grams, 300 Kyats for registration fees, 100 Kyats for envelope).

On the envelope, it is printed "Do not exceed 20g".  But, the up-rated usage was experimented by sending 50g mail.  The domestic rate for 50g is 500 Kyats.  Additional 300 Kyats adhesives were added to pay for the balance.  According to the officer at Mandalay GPO, the Za system only accept up to 20g.

Another up-rated example is with air mail fees.  The mail sent from Sittwe, Kawthaung, Myeik, Dawei and Kengtung can be sent through internal mail service.  This stationery envelope needs to be affixed with another 100 Kyats for air mail fees.

The envelopes were first on sale on 5th Jan at most of the major post offices.  Some experimental mails were posted since 1st Jan.

Posted by Ko Toe Philately at 11:26 No comments:

As usual, first issue of the year is an Independence Day issue.  The stamp designs are based on the photo greeting cards produced by the Ministry of Information.  The original greeting cards are distributed among the Government. 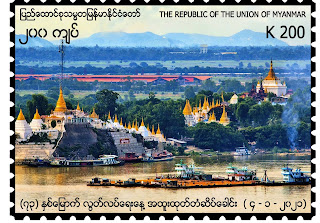 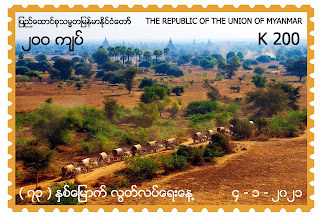 <More photos of FDCs to be posted>

Posted by Ko Toe Philately at 16:24 No comments: 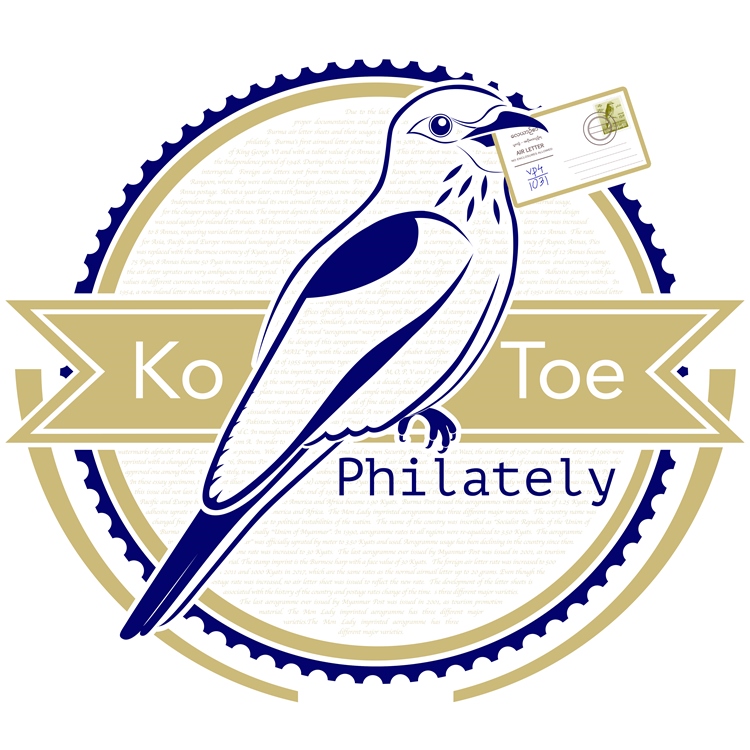 Ko Toe Philately has published the android app on "Myanmar Philately". It is the first app ever in Myanmar philately. Please download and install your copy of the app on your phone or tablet with android version 4 and above. Kindly notify me if you have any difficulties with downloading and installing.
It is the beta version of the app, and I am organizing the information to add the section "Myanmar Postage Stamps (1937-Present)" to the app. Your rating, feedbacks and comments are welcome.
Click the image to download!